Although deaths involving SIDS have declined by about half since the “Back to Sleep/Safe to Sleep” campaigns of the mid 1990s, “Sudden Infant Death Syndrome” (or its more-broad category SUID, “Sudden Unexpected Infant Death”) sadly still causes roughly 3500 deaths each year in the US, according to the CDC. Whilst we have not yet found a way to eliminate SIDS from the face of the earth, the good news is that there’s plenty you can do as a parent to reduce the risk to your baby.

This includes gaining a better understanding of the main causes of SIDS, choosing the right bedding for your baby, and increasing your own awareness of this important issue.

As of right now, though, the exact reasons for these deaths remain unexplained; but about one quarter are attributed to either suffocation or strangulation because of faulty sleeping arrangements, including bedding products.

Knowing this, that ¼ figure represents our best hope for taking a big crunch out of that 3500 figure—after all, it’s easier to resolve a problem when and if you know the actual process involved. It’s this knowledge, for example, that has led to recommendations that crib mattresses not be too soft or fluffy, which can lead to babies suffocating.

Why Do Some Babies Stop Breathing While Sleeping?

It is suspected that some babies who sadly succumb to SIDS may have had immature arousal centers in their brains. If this is the case,
it would explain why the babies were incapable of rousing themselves naturally while experiencing troubled breathing. It is also suspected that babies that sleep on their stomachs are especially susceptible to SIDS. Apparently, this position increases the chances of such babies re-inhaling oxygen-deprived air.

If so, the ages most vulnerable would be between 2 and 4 months old. In spite of this, all babies need to be closely monitored until after they turn 1.

Which Babies Are Most At Risk? 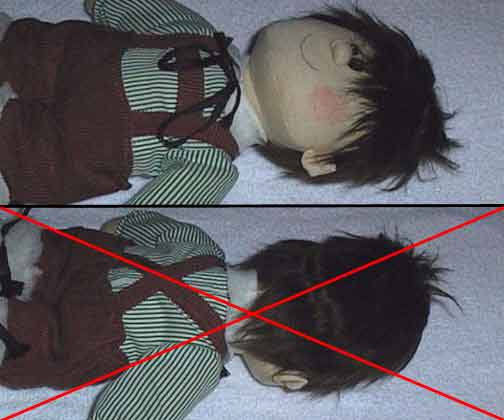 The statistics reveal that 3 out of 5 victims of SIDS are boys. Also, Native American and African American babies are 2 to 3 times more likely to fall victim to the condition. Other especially vulnerable populations include low-birthweight babies, those born prematurely, and children exposed to toxic chemicals (including those produced by tobacco smoke).

But the most vulnerable group of all may be, as has been stated, babies sleeping on their stomachs. Fortunately, the most obvious solution is to make sure your baby sleeps on their back, especially when not closely being supervised. A baby sleeping on his/her back has better access to breathable fresh air and isn’t as likely to experience over-heating—yet another thing suspected of triggering SIDS. The bad news is that some people aren’t heeding the advice, partly because they know that babies often sleep more easily and for longer periods of time while they’re on their stomachs. The consensus among the experts, though, is that it’s much safer to have your baby sleep on their back.

10 Ways To Reduce The Risks Of Sudden Infant Death Syndrome 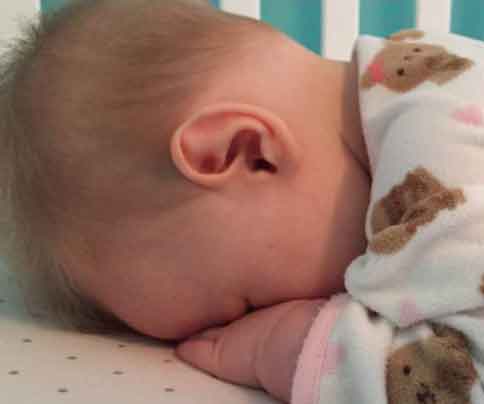 In addition to making sure your baby sleeps on his or her back, especially when not directly supervised or monitored, you should seriously consider the following 10 tips or recommendations:

1. If possible, avoid even short naps and snoozes on babies’ stomachs. Some studies have revealed that a baby faces an 18 times greater chance of dying from SIDS if allowed to take even short naps on their stomachs.

2. Avoid allowing babies to sleep on their sides as well. Some researchers say that babies sleeping on their sides (are twice as likely to die from SIDS if they are susceptible, as opposed to babies that routinely sleep on their backs. For one thing, the experts say, it is much easier for a baby to turn him/herself back unto her stomach from a side-sleeping position, therefore making this position more dangerous. After rolling onto their tummy, the baby may then not have the strength to roll back into a safe position.

3. Don’t let your desire to not have your baby succumb to flattened head syndrome or plagiocephaly (the flattening of the soft skull by babies that are placed for too long in the same head-leaning-back position) compel you to not put your baby on his/her back when asleep.

First of all, this condition isn’t caused just by a baby always sleeping on his/her back. It may be that the baby spends too much time on his/her back while being awake. Obviously, that problem is easily fixed. Simply change the baby’s position while he/she is awake and supervised. Placing them on their stomach periodically under such circumstances should give the skull time to regain its shape. Another thing you can do to prevent a misshapen is change the baby’s position of his/her head, alternating from facing to the left to facing to the right each night.

4. Avoid surrounding babies with blankets, sheets, pillows, stuffed toys, and comforters. All these things may cushion her surroundings but they can also interfere with a child’s breathing capacity; for that matter, extra soft, overly firm, fluffy or badly fitting mattresses also pose a significant danger.

In order to keep your child from getting cold, make sure the temperature in the room is adequate and, instead of covering your baby in a loose blanket, use a sleep sack or a receiving blanket, which are tighter and unlikely to smother a baby. Don’t, however, allow your baby overheat—according to experts, overheating greatly increases the dangers of SIDS. In fact, read the next suggestion!

5. Strive to keep your baby comfortably cool. Inability to breathe properlyis the biggest risk with SIDS. The next one is temperature. A nursery kept too warm greatly increases the risk of SIDS. Make sure the temperature in the room stays around 68 degrees and, whatever you do, don’t put the crib too near a radiator or heating unit. Also, dress the baby in light layers of clothing that are easily removable, if necessary.

6. Constantly monitor or supervise a baby and toddler. If you can’t be in the room all the time, then buy a camera and monitor system so that you can keep an eye on the baby from another room. If you hire people to watch your baby, make sure that they understand that you expect them to not leave the child for too long—actually, not at all would be preferable. If you can see that the child isn’t breathing properly, you can always do something about it—call 911 or give CPR—but you can’t do anything if you aren’t there to take care of the problem.

7. Get the right type of crib for your child. Although no one can say that the best crib mattress in the world will absolutely prevent SIDS, having the wrong kind can definitely make SIDS more likely. For that reason, buy a mattress with the right amount of support and firmness. It doesn’t have to be particularly comfortable—comfort is more important for a toddler. A baby needs a surface that will make suffocation unlikely. To that end, don’t get a foam mattress that is too weak or flimsy; the same goes for a coil mattress.

8. Be careful with what your child is wearing when you put them to bed. Clothing that is too loose (possibly leading to suffocation) is a no-no, as is clothing that will make the child overheat.

9. Be especially careful concerning your child’s diet and the medications that you give them, including OTC medicines. Actually, don’t ever give a child anything that hasn’t been approved or prescribed by a physician. Remember that some foods may make your child weak, lethargic and even drowsy—the same, of course, goes for all medications (even the prescribed kinds—which is why you always watch children closely after every dose you give them). A lethargic or weak child may lack the strength to snap out of a SIDS-related event, such as trouble breathing.

10. Make sure that your child is up to date on all his/her check-ups, vaccines and medical treatments. A child that is sickly is more likely to succumb to SIDS.

The bad news is that SIDS is still around. The good news, however, is that there are many things that you can do to reduce the risk of SIDS within your household. Someday maybe SIDS will be completely wiped out form the face of the earth—for now, however, the best that we can do is reduce the risks and make sure that our children are protected from as many dangers as we can resolve—even if only one child at a time.